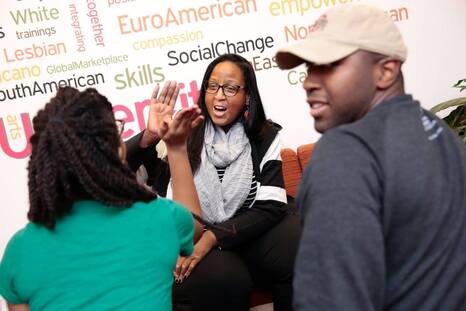 PATRICIA CUNNINGHAM, PH.D., was a fierce champion for the causes she cared about, especially social justice. But to her students and so many of those she had an impact on, she was simply Dr. Patty. A native of Springfield, Ohio, Patty was a three-time graduate of The Ohio State University, earning her bachelor’s in women’s studies, master’s in higher education and student affairs, and Ph.D. in cultural foundations. As the Director of the Social Change Program at OSU, she taught leadership courses covering a vast array of topics, including poverty, race, gender, and civic engagement. During her time at OSU, Patty led a number of organizations focused on social reform, including the Buckeye Civic Engagement program, which leads projects that benefit poverty-stricken Columbus neighborhoods. She was a mentor for Office of Diversity and Inclusion and the Todd A. Bell National Resource Center. “Patty was involved in every aspect of social justice: food insecurity, school-to-prison pipeline, health care inequities… you name it, she had plans to address it through a grant, a program she was going to start, or advocacy to other groups,” said her friend, Rachel Tjoeng. “She couldn’t choose just one thing because it all mattered.” ​

Patty developed several award-winning civic engagement and service programs that, under her leadership, formed a new one-of-a-kind department in OSU’s Office of Student Life—the Department of Social Change. Her department empowered hundreds of students to go back into their own communities or learn from a new one to become lifelong change agents. Patty started more than 50 community-based programs including after-school programs for Columbus City Schools, mentorship and educational programs for incarcerated youth for the Ohio Department of Youth Services, and extracurricular enrichment for children and their parents for the Columbus Recreation and Parks Department. Her leadership institutionalized the department's stature at the university and in the community before her transition from this world in 2017 at the age of 37.

Throughout her life, Patty had the drive to succeed and a heart to serve. Her legacy lives on in the lives of the people she served, taught, mentored, and empowered to become their best selves and always give back in the process.